Shinjuku (Japanese: 新宿区 Hepburn: Shinjuku-ku) is a special ward in Tokyo, Japan. It is a major commercial and administrative centre, housing the northern half of the busiest railway station in the world (Shinjuku Station) and the Tokyo Metropolitan Government Building, the administration centre for the government of Tokyo. As of 2015, the ward has an estimated population of 337,556, and a population density of 18,517 people per km². The total area is 18.23 km². Since the end of the Second World War, Shinjuku has been a major secondary center of Tokyo (fukutoshin), rivaling to the original city center in Marunouchi and Ginza.

Shinjuku is also commonly used to refer to the entire area surrounding Shinjuku Station. The southern half of this area and of the station are in fact part of the Yoyogi and Sendagaya districts of the neighboring Shibuya ward.

203Relaxing stay in Shinjuku,3mins to station 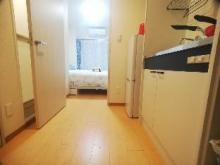